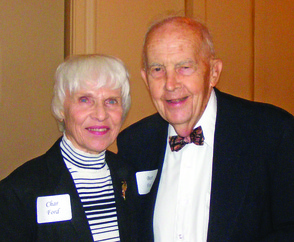 With a history that goes back to the days of the Old Testament, the practice of tithing—giving ten percent of one’s assets to charity—demonstrates a profound, enduring commitment to “giving back.” Those who tithe set a high standard: Their selflessness reminds us of our own responsibilities to others. Charlotte Kupferer Ford, known to her family and friends as “Char,” was one of those special people. She died at the age of 87 this past May. Through her will, she left five percent of her estate to the Fischoff National Chamber Music Association and another five percent to the First Presbyterian Church of South Bend, where she and her husband Burt—a well-known attorney with Jones Obenchain, LLP, who died in 2008—were very active members.

A South Bend native, Char met Burt at Central High School, where the two served on the student council together. Char received her undergraduate degree and an MA in History from Indiana University Bloomington, where Burt studied law. When Burt earned his JD, the couple returned to South Bend where they raised their four children and remained.

Char and Burt put the groundwork for their philanthropy in place long before they died. Over the course of a decade or so, the Fords established multiple Gift Annuities with the Community Foundation of St. Joseph County. A Gift Annuity is a contract between the Community Foundation and a donor (or donors) in which the Foundation accepts a gift of cash or other assets and then pays the donor a guaranteed income for life determined by the gift’s value. When the donor dies, the remaining assets in the Gift Annuity go into a permanent fund to benefit the cause of the donor’s choice.

For Char Ford, that cause was the Fischoff National Chamber Music Association. A longtime supporter and Director Emerita of the Fischoff, Char loved music. She was a pianist who played regularly until just weeks before her death.

Why did Char devote so much of her time and her assets to supporting organizations such as the Fischoff, the South Bend Symphony Orchestra, the Women’s Art League, and others? In her words, as quoted in her obituary in the South Bend Tribune: “Because I enjoy it and have been able to do so, I have always volunteered. Every one of us is exposed to visual and performing arts. What will be our heritage to future generations?”

Because of Char, Burt, and their generosity, that heritage will include more music.