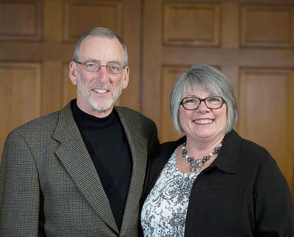 Greg and Mary Downes met in the early ‘70s, when both were teaching—Mary in the Elkhart schools, and Greg at South Bend’s St. Casimir school, on the city’s West side. They married the same year they met.

“Our second date was our rehearsal dinner,” Mary says, laughing.

For more than a decade, Mary taught with the Elkhart, Oregon-Davis, and Warsaw school corporations, and then her career took a turn into politics. After working with South Bend’s Mayor Joe Kernan on youth programs, Mary became Joe’s Chief of Staff when he was elected Lieutenant Governor of Indiana in 1996. She remained in that role until 2002. When Governor Frank O’Bannon died and Joe became Governor the following year, Mary left her position as principal of South Bend’s Adams High School to rejoin him as Chief of Staff.

Greg’s career path led from education into insurance. Previously President and CEO, Greg is now Chairman of the Board with Gibson Insurance, where he’s been for more than 30 years.

In the early 1990s, Dave Gibson—Greg’s business partner and mentor—asked Greg to become a founding member of the Marshall County Community Foundation. (The Downeses were living in Plymouth at the time.) Through his service there, Greg became a staunch proponent of the community foundation concept of geographically-defined endowed philanthropy.

Their involvement with the Community Foundation of St. Joseph County began around 2005, after Mary had left the state capitol and returned to South Bend. She and Greg heard good things about the organization from their attorney, Greta Roemer Lewis, as well as friends Tom Varga and Karl King.

“I think Rose asked me to have coffee,” Mary says, with a smile, “and it just grew from there.”

Mary’s relationship with the Community Foundation includes service on the grants committee, leadership roles with the Lilly and the Laidig scholarship committees, and eight years (and counting) on the Foundation’s Board.

“My time on the grants committee really reinforced how many great nonprofits our community has,” Mary says. “The big ones, of course”—together, she and Greg tick through a list that includes the YWCA, the Center for the Homeless, REAL Services, the Boys and Girls Club, the United Way, and South Bend Heritage, all of which the Downeses have been personally involved with—“but there are also so many excellent smaller organizations that are less known, like Stone Soup and La Casa de Amistad.”

Both funds are very broad in focus, reflecting Greg and Mary’s personal commitment to supporting the community wherever the need is greatest—both now and into the future.

“Over time, needs change,” Greg says, “and we like that the Community Foundation has the flexibility to respond to those changes. “

Both Greg and Mary appreciate the Foundation’s role as a convener, bringing representatives of local nonprofits together to sit down, develop relationships, and—through programs like the Community Foundation’s Nonprofit Executive Leadership Program, created in partnership with Notre Dame—learn new skills that increase their organizations’ capacity.

Also, Mary is very enthusiastic about the Foundation’s current work with the Group Violence Intervention, an initiative developed with the City of South Bend and more than 30 other stakeholders to reduce violence in our community (see full story on page 1).

“I was really glad to see the Community Foundation jump in on this,” says Mary. “Having the Foundation lead this effort takes the ‘politics’ out of it.”

In the future, Greg hopes to see the Community Foundation extend its work in education, building on its successes in early childhood education to address some of the challenges facing middle schools and high schools—particularly, the low number of girls who pursue STEM education.

Both feel that the Foundation has been an ideal partner for furthering their commitment to the community.

“When the Community Foundation gets behind something, it adds tremendous credibility to the project. It provides a voice, as well as money and expertise,” Mary says. “It’s a real force.”

“No organization in our community is more trusted,” says Greg, “than the Community Foundation of St. Joseph County.”